You may like my recipe for Japanese Yogurt cotton cheesecake if you’re a big fan of this soft like cloud cheesecake.

Last week when buying Ricotta cheese, I tentatively used it for making Lasagna, which is as old as a fairy tale; however, my store-bought Ricotta was too big to use it all since my baking pan was small enough for 4 persons. I quickly used the leftover for our dinner dessert and this cheesecake came to my head, unintentionally. Why ? I was watching Cooking with the Dog (Oh my, am I freely advertising this channel but Francis the dog is so cute that I like watching him again and again ) and thinking of something Japanese.

Not only is Ricotta cheesecake tangy but also sweet flavored. Ricotta itself is not as sour as the regular cheese so that Ricotta does not bring you the vinegar feeling. I like serving this cake with jam (ideally strawberry jam or preservatives) or blueberry or any kind of fruits that you like. Serve warm or cold has its own taste and sometimes, I’m so gluttonous that this cake has no chance to be served when it’s cold.

– In a double boiler, melt butter, amaretto, cheese and heavy cream with 30 g sugar until combined. Set the bowl aside for 10 – 15 minutes to cool down.

– Lightly beat the egg yolks then gradually mix in the cheese mixture.

– Sift the cake flour and gently fold in the yolk mixture.

– Use a fine mesh strainer, strain the yolk and cheese mixture to have a very fine mixture.

– Use a whisk to fold the whites to the yolk mixture.

– Let the cake sit in the open oven for 5 minutes before unmolding. This technique can prevent the cake from shrinking.

Here’s my tutorial video for making this cake

I think sushi is the all in one good eat that can not only make you feel full easily but also consist of enough nutrition for a good health. I’ve never been to Japan to luckily enjoy the original sushi there but here in America, Japanese restaurants are ubiquitous so that my sushi craving can be resolved anytime.
Sushi in America has its own name, depending on where that sushi originates from. Correct me if you find that American sushi has the same name as its brother in Japan. California roll, well, its name probably tells you where it is from. This sushi is very easy to make and of course, very easy to eat. I’m not a big fan of avocado but the combination of this fruit and crab really balance the flavor of the sushi. You shouldn’t be intimidated when rolling sushi. Just practice and practice.

Method
– mix sushi vinegar with hot cooked rice with a fork. Set it aside
– add the lemon juice on the green side of avocado to prevent the avocado from getting dark
– mix mayonnaise, chili sauce with imitation crab. Set aside

Assemble
– divide the sushi rice into 6 portions and follow the pictures to know how to roll the sushi
– Note that you should use a sharp knife when cutting the sushi. After each slide, use a damp cloth to clean the knife. This tip can help you have a beautiful cut.

To serve: dip with soy sauce mixed with washabi

Any tea flavored ice cream has its unique flavor that you will not feel bored each time you try it again. The bitterness from the tea, the sugary crunchy from the sugar cane and the fatty bite from the yolks make your ice cream unforgettable. This time we come with the common but famous tea, the matcha or green tea.

There’s a funny thing but useful tip for us when buying green tea. The darker green color the tea has, the worst flavor it brings to your ice cream. We should memorize the simple thing “Let make the green tell its color”. In other words, we have to be persuaded that it’s not possible to have a “green” green tea. Green tea is natural so its color can not be compared to the green food coloring. Another important thing of green tea is that it’s expensive and lots of other greenish green tea imitates the authentic green tea. Just as the way you memorize your chemistry’s lessons, you should be able to understand why the store bought green tea ice cream has a very attractive green color ^^.

– In a sauce pan, heat the half and half cream with 3/4 cup sugar in the low heat. Set it hot but not bring to a boil

– Pour in a thin stream the hot milk and stir well.

– Use a mesh strainer, strain the yolk and milk mixture back to the sauce pan.

– In a medium heat, use a flat spoon and stir frequently the yolk mixture. If your heat is too hot, keep it at low-medium heat.

– Stir until the custard coat your spoon. The custard cooking process is done when you run your finger on the back of the spoon, there’s no other custard cream comes back to your finger running way. It should take about 10 – 15 minutes for making the custard.

Note: Don’t ever heat the custard in a medium high heat. It would be easy to bring your sauce to a boil and your unexpected baby food will appear.

– Remove the custard cream from the heat. Stir in the heavy cream.

– Keep your custard cream in the refrigerator for at least 6 hours or overnight before pouring it in the ice cream maker. Do as the manufacturer guides.

I rarely make cheesecake, significantly due to the high calorie from each bite of it. However, the cheesecake craving usually jumps into my daily abstemious food portion at least once a week. That’s why I have to find a way to loose some part of the cream cheese in the cheesecake ingredients, certainly because of the calorie lowering demand. The consuming of this new version Japanese cheesecake went up quickly right after the cheesecake had gone out from the oven.

There’s no need to be verbose in describing Japanese cheesecake. That cake is softer and lower in calorie than the original cheesecake due to the egg white increase and the cheese decline in the cake’s structure. But I still wanna reduce more cream cheese to satisfy my cheesecake craving.

Yogurt can be a good substitute for cream cheese if you know how to use it. Of course, the yogurt’s structure differs from that of cream cheese then many amateur bakers ( similar to me ^^ )feel hard to deal with yogurt in cheesecake baking. My experience is to choose the best store-bought plain yogurt and drain it overnight before using. The yogurt therefore would be no soggy but firm enough to be ready for subbing the cream cheese in this cake. In this recipe, I cut down half the normal cheese required, replaced it by drained yogurt. Because of the significant reduction of cream cheese, the corn flour would be doubled to make the cake more sturdily. The yogurt flavor definitely would be more delightful than that of the cream cheese.

Ingredients (for 7 inch round springform pan or removable pan)

– In a double boiler, melt cream cheese, butter, milk and 30g sugar. Stir until they are smooth then take it out from the boiler.

– Add the yogurt and stir well til combined.

– Add the flour mixture. Use a whisk to fold the flour until it disappears.

– Gradually add the egg yolks and stir until everything is incorporated.

– In a clean bowl, beat the egg whites at low speed until it’s frothy then add the cream of tartar.

– Beat the whites at speed 2 while gradually adding sugar. Beat until the whites reach stiff peak but not dry. Note: you should stop beating as you see the beater is raised.

– Gently fold the beaten whites into the cheese mixture. Pour the mixture into the pan.

– Let the cake sit for 20 minutes before take it out from the pan.

Serve: you can use the cake when it’s cold or even when it’s warm. I prefer the warm cake with a cup of black coffee.

Here’s my tutorial video for this cake 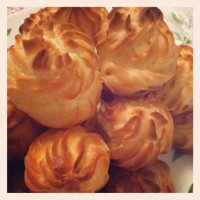 My cooking blog is for everyone who either randomly visits to look for a good recipe for a dinner, or intends to subscribe my new posts ( it's my pleasure). Please use my recipes as your private cooking guide but not for any commercial activity, unless you ask for my permission. If you use my recipes on your blog, please give me a credit by simply quoting my blog's name that your recipes originate from.
Please leave me any comment or your request for a new recipe, I would be glad to have new experiences from your cooking suggestions.